Forced evictions: The devastating plight of IDPs in Banadir Region 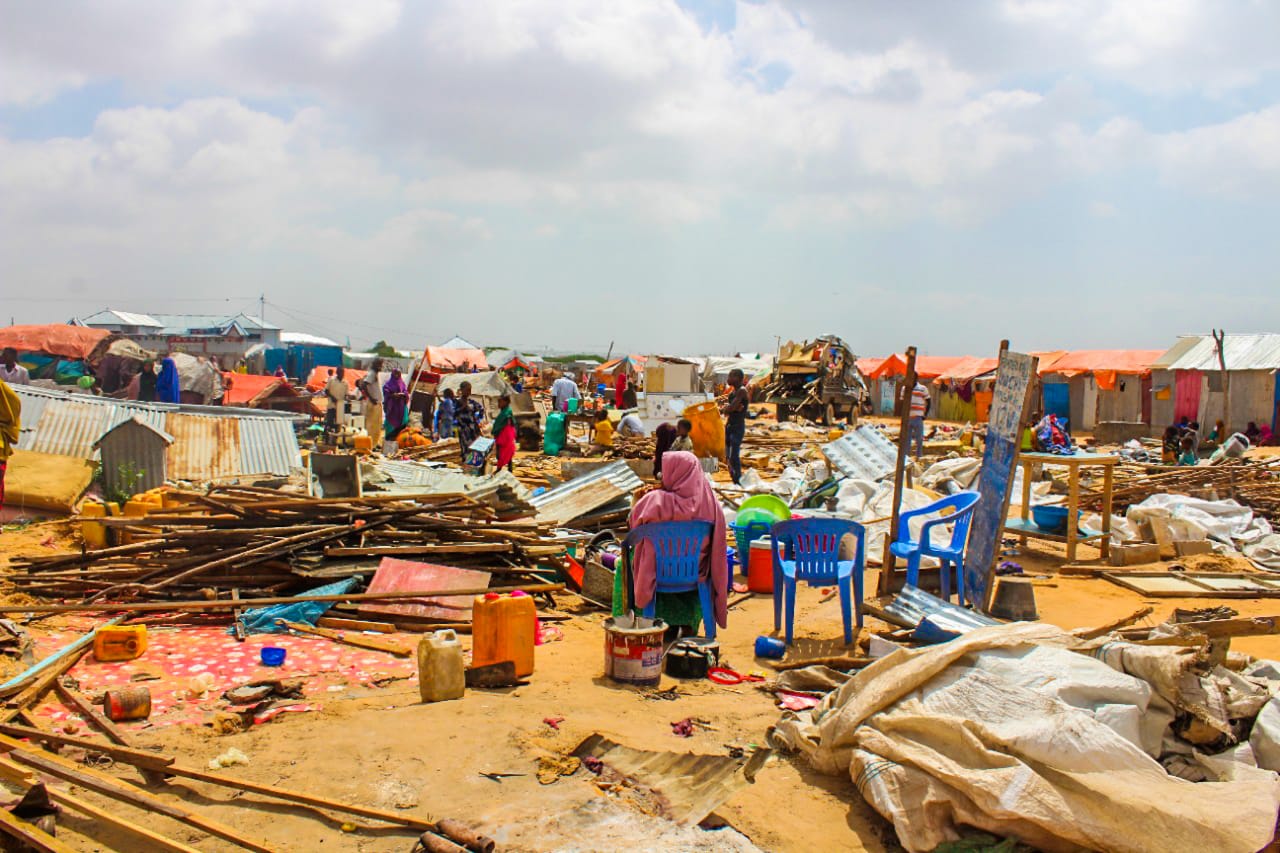 Mustafe Hassan scours through the remains of his destroyed shelter after an eviction. He is an internally displaced person from  Bilkheir site in Daynille district where other 211 families were forcefully evicted. Before the eviction, the IDPs had stayed in Bilkheir site for 8 years, and had an oral land tenure agreement of 10 years. They were provided with a two-week eviction notice to leave the area by a private land owner. This, according to Mustafe, was not enough:

“We were not prepared at all and we pleaded with the land owner to give us more time.” Says Mustafe. “The two weeks eviction notice he gave us was very short and we needed more time to figure out where we will go.” He added that the land owner returned three times and all their pleas for mercy fell on deaf ears. The abrasive nature of the land owner made it hard for the IDPs to negotiate with him. His level of haughtiness scared them. Two weeks later, he evicted them.

Many families were evicted in early December 2020 from Daynille District in Banadir region. This led to loss of livelihood sources, destruction of WASH facilities, damage to household property, damage to education and learning spaces, emotional stress among others. This devastating thread of plight happens to families that find themselves victims of forced evictions.

On that fateful day, Mustafe was not at home when the eviction happened in his site. Like every other day, he was at the market where he goes every other day to look for work to feed his family. He was informed about the eviction by a neighbor who called him. When he arrived at the camp, his shelter was destroyed and his children were missing. “My main worry was to find my 3 children. I usually leave them at home while I go out to look for work.” Luckily for him, he was able to find them cooped up  at the community center. Now, he started worrying about his house and property.  “We don’t have any option but to leave or else they will come back and do something worse.” He was indignant, it was evident in his facade. Situations like Mustafes’ are distressingly common whenever there is a case of eviction in the IDP sites.

In Qayib site in Daynille district, 100 families were also forcefully evicted from Tabellaha area where they have been staying for 7 years. The eviction in Qayib site was synchronous with the evictions in Bilkheir site. The type of land tenure agreement they had with the private land owner was an oral agreement. For them, no eviction notice was provided prior to the eviction. Many evictions are done without due process, including without prior notice.

Shamso Ali, a mother of 5 sits outside what used to be shelter, looking confused as she holds her 9-month old child. Occasionally, she would stretch the hem of her hijab to cover and protect her child from the unforgiving sun and wind. The harsh conditions took a heavy toll on the child, whose asthma flared up. She was visibly disgruntled. She has endured 4 evictions in her lifetime. “I have faced many evictions but this one today is the worst. This is the first time I have not received any warning or notice for eviction. It just happened and I am stuck. I lost money during the eviction, they stole it. My child is sick and I don’t the money for hospital and for transporting these things,” she says, pointing to pieces of woods and tarpaulin that laid abjectly on the ground.

Shamso sitting in an place where her shelter used to stand before destruction.

The impact of forced eviction particularly for Muhsin, 25, who had amicably lived in Qayib site was psychological. The eviction had a profound detrimental psychological impact on him. Since the eviction, Muhsin has not gone out to look for work and is unable to provide for his children. Going back to look for work, he says, is not an option; “I cannot go look for work and leave my children and house again. I am afraid if I go I might lose everything.” But the sentimental losses for him are more than the material ones. “I had to leave my chicken behind that I had for five years. When I went back for them later, I found some of them dead and others missing. But life must go on.” He said with great fortitude.

Forced evictions commonly result in people being pushed into extreme poverty and as such pose a risk to the right to life itself. They have also been found to be tantamount to cruel, inhuman or degrading treatment, particularly when carried out with violence or with discriminatory intent. During forced evictions, people are frequently harassed or beaten and occasionally subjected to subhuman alacrity. Groups at particular risk of poverty and exploitation include female heads of households, unaccompanied and separated children and the elderly persons. Women and girls, per se, are particularly vulnerable to threats and violence, including sexual violence, before, during and after an eviction.

Bashir Ali Bashir, a HLP committee member in the dialogue sessions in Iskaashi site was closely following up on the eviction. The evictions were happening at Qoryole site near his location. They were welcoming the new arrivals who were forcefully evicted. Bashir says before the eviction, the land owner sent burly men who were callously threatening to rape the women in the site if they don’t leave the area. They were tepid to the IDPs situation and were talking in high, grating voices. “They came and started telling men that they would rape their wives and daughters if they did not leave immediately. We believed them because they were serious about it.”

Bashir Ali (in brown shirt) being interviewed during eviction

Fadumo Isaaq corroborated Bashir’s account of the encounter with the men in a more lurid way: “They were very loud when they came here, probably because they wanted everyone to hear. They told the men in the camp that the next time they come here they should hide their women and daughters.” Her statement beggars disbelief. “I knew what they meant when they said that. We all knew,” she continued. “We didn’t want to wait for them to come back again and we started to pack our things and left the area in a hurry.” says Fadumo with fear in her voice. Forced evictions have also disrupts education, sometimes causing children to miss months of schooling, and in other cases, causing them to stop going to school entirely. This results in spiking cases of early marriages for girls and child labor for boys.

The evictions in Bilkheir and Qayib led to destruction of WASH facilities as well as small businesses set up by the IDPs hence disrupting their livelihoods. The IDPs rely on precarious and unstable sources of income for survival and this greatly inhibit their progress. In Bilkheir, 80 latrines, the community center, the Qur’an school and the community’s water point were all destroyed during the eviction. For someone like Hassan Maxamed Ibrahim, a gate keeper, the  most pressing need for the people in Dahran is water and latrine. “We really need water and toilets here because people are practicing open defecation. When the darkness comes at night, people don’t even go far and you will see them sitting near the houses and doing their business. This is dangerous as it will bring diseases like diarrhea.”

Majority of the IDPs evicted from Bilkheir site have settled on a new piece of land in Idagabey area of Daynille district. They have acquired a new written agreement of 4 years and have the documents to prove it. Conversely, the IDPs evicted from Qayib site have settled in Shabelle site and Horyal site in Daynille district, constructing makeshift shelters using sticks, old clothes and tarpaulin.

IDPs clearing shrubs to settle in a new piece of land they relocated to through NoFYL’s intervention and negotiations.

NoFYL began registration of the IDPs who were forcefully evicted and settled in Bilkheir and Dahran IDP sites. We also provided psychosocial support to the families affected by the forceful eviction to help them cope with the aftermath of the eviction. Farhiyo Abdullahi was grateful to NoFYL for the swift response:

“I want to thank NoFYL for their quick response in helping us during the eviction. We feel relieved even after all the stress we went through. NoFYL was the only organization that heard our pleas and came to our rescue. Throughout the eviction, they were here with us and we felt like we were not alone. We thank NoFYL for the psychosocial support they gave to us, it has helped us a lot. We also thank them for talking on our behalf so that we can settle in a new land and also have an agreement of 4 years. ”

NoFYL is also providing housing, land and property rights awareness to the IDPs in the camps. NoFYL is also affixing HLP stickers in the camps to inform the IDPs on their rights with regards to housing, land and property. The dialogue sessions with the community leaders in the camps also addresses HLP issues including HLP rights, land tenure agreements and eviction notices. Through the paralegals, NoFYL is also facilitating negotiations with the land owners on the land tenure agreements and extensions in order to reduce cases of forced evictions. NoFYL was able to intervene swiftly after receiving alerts on the imminent eviction from the camp residents through the free hotline number (2181) that was put up in strategic areas of the IDP camps.

*Some names have been changed upon request and for protection reasons. 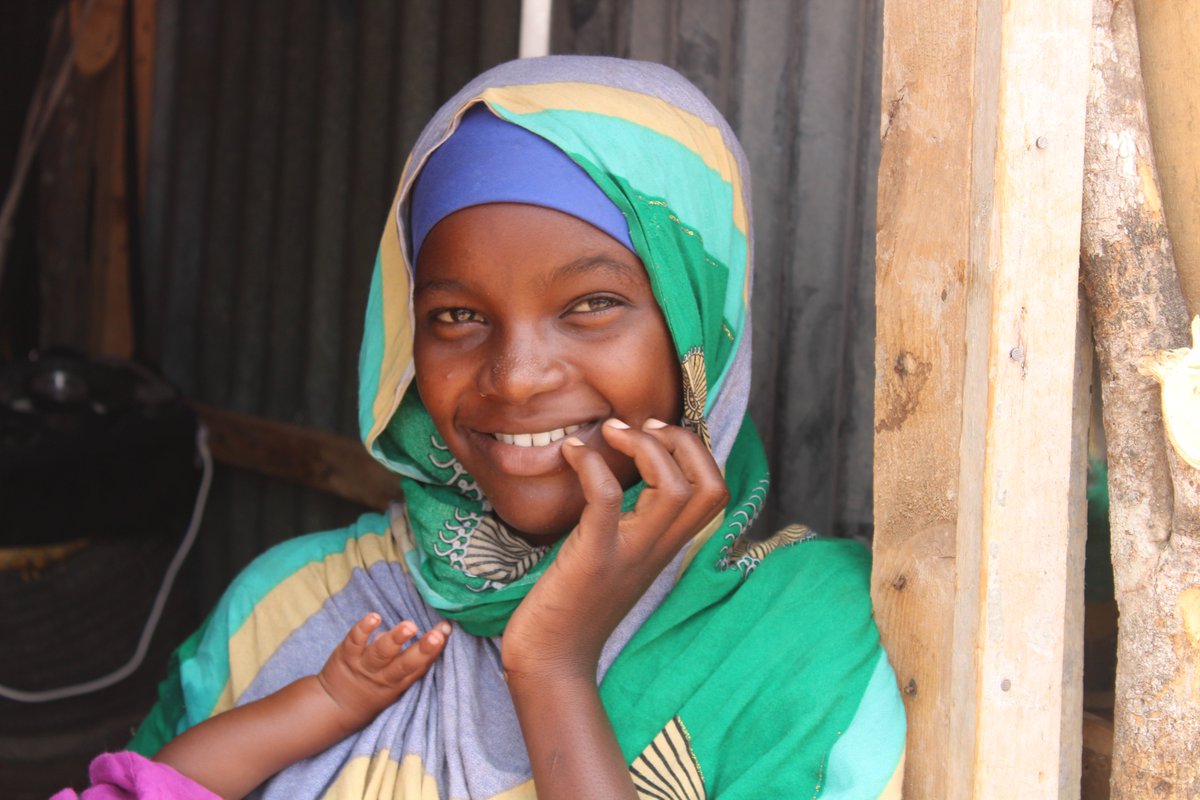